Even in these uncertain times without any football taking place, it’s still incredibly interesting to discuss the beautiful game. Today, we are focusing on the difference in quality between the best leagues of the world. We went through - completely unbiased - in the data created by our algorithm and came out with a few surprises on the other side. From South-America to Eastern-Europe, they are all featured in our research.

Logically, our first thought was wondering which competition was deemed the toughest according to the data from our models. The collected information had to be digested and divided into several categories to come up with an elaborate answer. Prior to our running the analysis, our guesses leaned towards either Spain or England and our  not to audacious prediction was backed by the data. The difference between these two is quite small, but in favor of England (score of 1710) with Spain (1683) closely following. For years, there’s been a lively debate about whether the Premier League or the LaLiga deserves to be called the highest level competition across the globe and we will dissect why the English league is rated higher than its Spanish counterpart. 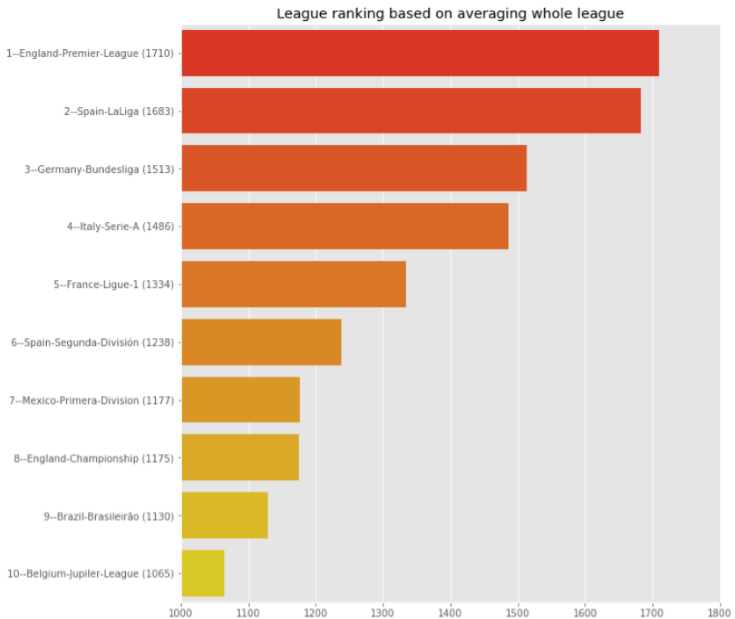 Our data is being collected and updated after each game by our algorithms using some of the most advanced metrics available such as expected goals or defensive coverage to assess team ratings. You can think of those ratings as an estimation of teams current strength.
For example, the score of Real Madrid is currently 2138 but this could drop quite significantly if they were to perform poorly in some games consecutively. At this moment, if Real Madrid were to face Dutch giants PSV (1307) on a neutral field, their odd for a win is 1.29 and a win with 2 goals is to be expected.
In numbers, the difference between England and Spain is  only 27 points. Where is that number mostly coming from? Well, England's best three clubs (Manchester City, Liverpool and Leicester) are on average better than Real Madrid, Barcelona and Atletico Madrid. And the result would be the same if you were to compare the best ten teams per league. Spain does however have the best ‘worst’ teams of the world with Mallorca, Deportivo Alavés and Osasuna. While the English wear the crown proudly, the difference between them and Spain is incredibly little and the battle is still not won or lost by either.
Another interesting fact is how the Liga NOS (Portugal highest division) is being perceived by our advanced algorithm. When only taking the best three teams per league in consideration, they only have France, Italy, Germany, Spain and England above them. However, their competition is branded ‘top heavy’ with Benfica, Porto and Sporting (in that order) as their best teams with an average score of 1532, but the rest of the competition are miles away from their level. That’s why they are only eleventh on the ranking based on the whole league with a score of 1063; a steep decline of 30.6%. 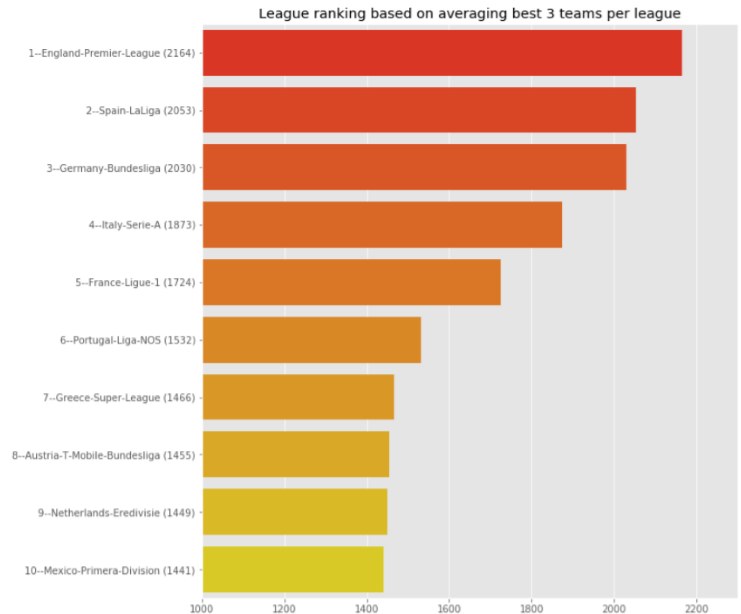 Brazil has surpassed Portugal when looking at the ranking of the whole league with a score of 1130. Their score has one really positive outlier in Flamengo (1507), who won the ‘Brasileirão’ last time out with 90 points, followed by Santos (74 points). They completely dominated the league and scored 86 goals (22 more than any other team). It’s no surprise that both top scoring players of the league, Gabriel Barbosa (25 goals) and Bruno Henrique (21), were part of the Flamengo team. The new season was scheduled to start in roughly a month, but the Coronavirus crisis makes it impossible to tell when this will actually happen.

These last few years, Shakhtar has been an interesting team to watch, both domestically and internationally. They are also known for their continued tendency to enroll vast amounts of Brazilian recruits; among their notable hires. payers such as Willian, Fernandinho and Douglas Costa. In the ‘current’ season, they eliminated Benfica in the first knock-out round of the Europa League and won their first game against Wolfsburg (1-2) in the following knock-out stage with the return still to be played. Because of their results in the competition and in Europa, their score of 1603 is completely justified, and place them above Ajax (1579) and just below Marseille (1639) in the ranking.

This was the first blog post out of many. Realistically, it’s going to be a long while before high level sport returns to normal. So, our aim for the upcoming weeks is to entertain you with interesting insights from how our algorithms perceives the beautiful game itself.